This performance was written and performed by Zoë McWhinney as part of her commission for the show Unscene. Unscene is a production led by Zoo Co, as part of the NLHF funded heritage engagement programme at Stanley Arts.

The pieces are each standalone, based in spaces at Stanley Arts which audiences may not usually spend time in, and some you may not even know existed!

Each artist has taken inspiration from a huge wealth of history related to the building and its surrounding communities.

Zoë McWhinney (she/they) is a well-known and leading Visual Vernacular poet in Britain, and also acts for stage and screen, coaches sign languages and creates poems in British Sign Language. Visual Vernacular is a form of storytelling which is important in Deaf culture, and is sometimes referred to as ‘Mime HD’. It is a non-language based mode of storytelling, accessible to everyone.

Stanley Halls is renowned for having almost every statue and bust stolen, with thefts throughout the ages, none of which have ever led to finding the culprits. This piece creatively explores how someone might’ve gotten away with it!

ICONOCLAST is performed and devised by sign language artists who are deaf, this Visual Vernacular tapestry takes a view of life at Stanley’s throughout its history; from the opening calls to the last lock-up. Performers are Zoe Mcwhinney (Wednesday, Saturday, Sunday) and Brian Cuzini (Wednesday/ Thursday).

You will meet a crafty street guy as they usurp the snoring ticket man and steals his red jacket. The trickster, now under-cover as a member of staff, then scrolls us through some iterations and mechanics of theatre and ticketing across the generations at Stanley as the crowds roll-up to see their shows. When the ghostly crowds have all been ticketed, and once they are certain that the show has definitely started, the crafty character reveals their secret plan.

They delightedly share how they have managed to steal 4 of Stanley’s missing busts; Darwin, Tennyson, Dickens and Faraday, without getting caught. This is no mean feat, and involves precarious ladders, massive bonfires used to melt down each statue, with each bust revealing a metal token the trickster then goes on to sell.

Now, the trickster’s magpie eyes are set on a final act of theft – the one remaining bust opposite the ticket hall – William Shakespeare. 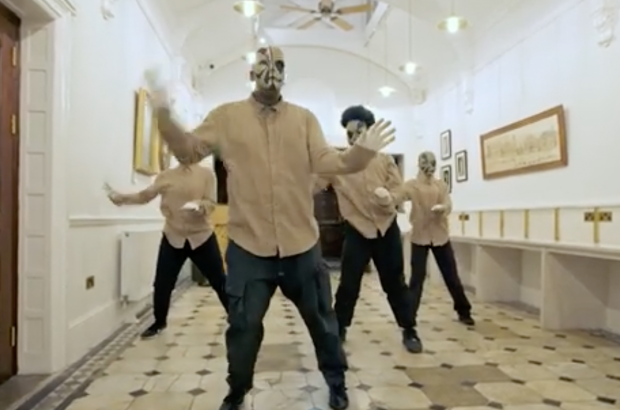 Unscene: A Touch of Class 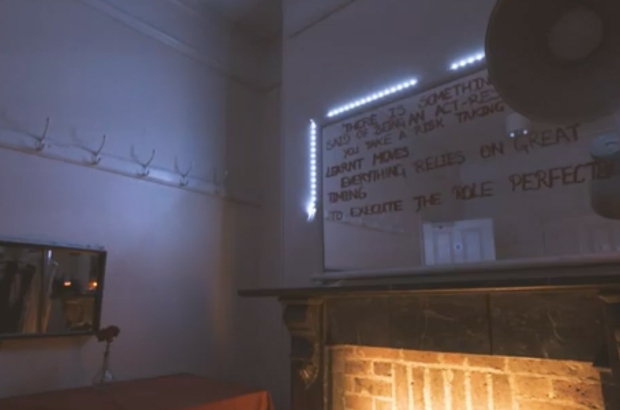