After a long break, we’re back with a big funny Friday night show full of laughter at the Stanley Arts Yard Bar.

Reserve your seats now for an evening of the best stand up comedy, where professional comics off the telly try out new jokes and ideas, the only comedy night in Norwood!

Simon Brodkin
You may know Simon Brodkin as ‘comedy legend Lee Nelson’ (Sun) or ‘some unfunny pillock’ (Deputy Prime Minister) who gave Theresa May a P45.
After three hugely successful BBC series as Lee Nelson, multiple sell-out tours and world-famous stunts on Sepp Blatter, Donald Trump, Kanye West and Britain’s Got Talent, the award-winning, critically-acclaimed comedian unveils his funniest character yet… himself!
Starred multiple times on BBC One’s ‘Live At The Apollo’, both as guest and host.
Don’t miss Simon Brodkin’s highly-anticipated stand-up . ‘Hilarious’ (List). ‘Genius’ (Independent). ‘Get him out!’ (Donald Trump).  “There aren’t many better comedians to turn to”  The Daily Telegraph “A prodigious talent”  The Times

Nabil Abdulrashid
Nabil Abdulrashid is an award-winning comedian, writer, presenter and actor. Nabil recently competed in the 2020 series of Britain’s Got Talent, enjoying a triumphant run to the competition’s final, drawing praise from the show’s judges for his hilarious and uncompromising brand of stand-up comedy. Awarding Nabil the coveted ‘Golden Buzzer’ in the first round of the competition, Alesha Dixon praised his “edgy, charismatic” style while David Walliams described both his performance and writing as “perfect”. In a piece suggesting Nabil should have won the competition overall, the Sunday Telegraph described Nabil’s performance in the final as “urgent, uncompromising and refreshingly radical fare, smartly woven into a gag-packed set.” Before appearing on BGT, Nabil had already carved out a unique, exciting and varied career in UK and international comedy. Within a year of starting to perform, he had already written, starred in and directed his own sketch show on Channel U and was also joint winner of the Which Religion Is Funniest? competition, judged by UK comedy legends Omid Djalili and David Baddiel. Triumphing over a number of more experienced comedians in the final of the latter, Nabil won the opportunity to perform at London’s prestigious Hammersmith Apollo, becoming the youngest ever black stand-up to do so. Nabil has also previously been a finalist in the renowned New Act Of The Year and Laughing Horse stand-up comedy competitions and in 2020 won Joe.co.uk’s TV Comedian of the Year award.

Rosie Wilby
Rosie Wilby is an award-winning comedian who has appeared many times on BBC Radio 4 programmes including Woman’s Hour, Loose Ends, The Human Zoo and Four Thought, at major festivals including Latitude and Glastonbury and in the finals of several major comedy competitions. Her first book Is Monogamy Dead? was shortlisted for the Diva Literary Awards 2017, longlisted for the Polari First Book Prize 2018 and followed her TEDx talk of the same name. Her trilogy of solo shows investigating love and relationships began with The Science of Sex, which has been performed all over the UK, in New York, Los Angeles, Sydney and Berlin, and ended with The Conscious Uncoupling, which toured to venues including London’s Southbank Centre and was shortlisted for Funny Women Best Show. Rosie also presents The Breakup Monologues podcast, which has been recommended by Chortle, The Observer, Metro and Time Out, writes for publications including The Guardian, Sunday Times and New Statesman and appears as a commentator on sexuality, dating and love on TV programmes including Good Morning Britain, radio shows including LBC’s Lucy Beresford on Sex and Relationships and podcasts including The Guilty Feminist.

Marlon Davis
Marlon is a talented comedian, improviser and actor whose TV appearances include MTV’s Brown Eyed Boy, BBC’s Live At The Apollo and Comedy Central’s Comedy Store Live. Beginning his career in stand-up comedy in 2005, Marlon Davis made the final of two national competitions Laughing Horse and So You Think You’re Funny at the Edinburgh Fringe Festival the following year, very quickly and firmly cementing his status as a rising star on the comedy circuit. Marlon has supported Kevin Bridges, Michael McIntyre and Alan Carr on tour and is performing at clubs, arts centres and theatres all over the UK. Marlon’s act is inspired from his upbringing, exploring urban Britain tackling its social issues with skillful characterisations.

She was a team captain on a panel show for RTE 2 called Choose or Lose. A TV presenter for RTE’s coverage of Electric Picnic in 2015. A talking head on the year that’s in it. She has a new chat show called the Alison Spittle show with guests such as Tara Flynn, Aidan Power and Kevin McGahern. Her show Alison Spittle discovers Hawaii had a full sell out run at First Fortnight and was nominated for two awards, Little gem award for best show under an hour and the first fortnight award for destigmatizing mental health.

Hatty Ashdown
Hatty co-wrote and created the Comedy Central sitcom Give Out Girls, is a regular on the London comedy circuit. She starred in BBC Radio 4 Sitcom Romance and Adventure, presents the Funny Mummies Podcast and Radio Show for The Other Woman on Soho Radio, and hosts Screaming with Laughter comedy club – the original daytime comedy club for parents where baby can come too! 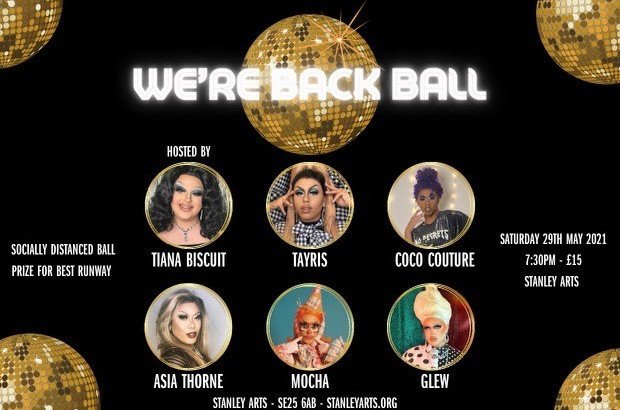 Drag from a Distance – We’re Back Ball